I was recently approached with regards to giving an opinion of a Rum cask ‘finished’ whisky, and though I’m more than partial to a little drop, I’m most certainly not a whisky drinker by any stretch of the imagination. But I thought that it would be a fun little aside to give it a try. I was duly sent a 100ml sample of The Balvenie 14-year-old Caribbean Cask Whisky for the purposes of this post. So here is a little about The Balvenie Caribbean Cask taken from choice excerpts of the press release information that accompanied the bottle.

This whisky was created by The Balvenie Malt Master, David Stewart who in 2012 celebrated his 50th anniversary at the distillery! The single malt whisky at the base of this release has undergone a 14 year maturation period in traditional oak whisky casks prior to being transferred to casks that have previously held Caribbean Rum. This is purely to ‘finish’ the aging process.

When asked about The Balvenie Caribbean Cask, David Stewart said “We’ve found that many years maturation in traditional oak whisky casks followed by a few months of Rum cask maturation complements The Balvenie single malt very well. This expression is a beautifully rounded whisky that combines traditional Balvenie vanilla notes with rich toffee, a hint of fruit and a warm, lingering finish” 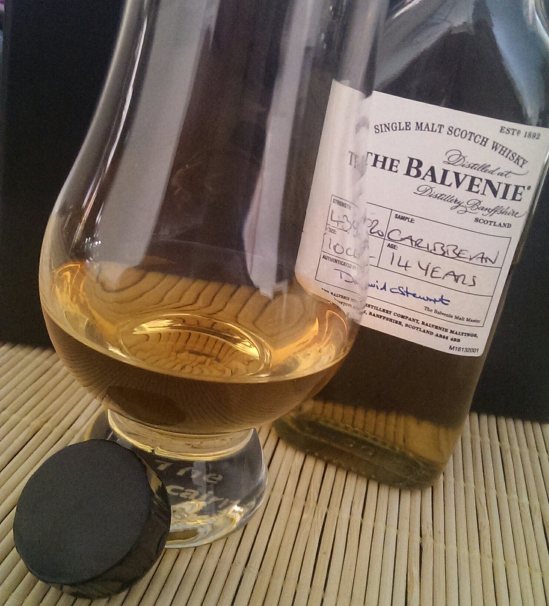 Prior to receiving any information or indeed the sample bottle, I posed a few questions that were referred to the Balvenie Brand Ambassador who was very helpful in assisting with responses.

Firstly I asked how long the whisky spends finishing in the Rum barrels? Is it a fixed period based on experience or is each barrel sampled and a judgement call made? It appears that the whisky is finished for between 3 and 6 months in the casks. There is no fixed period as such as it depends on how active the cask is so it is the role of David Stewart to determine when the time is right. The barrels are then blended together to achieve the consistent flavour profile.

I foolishly assumed that they had obtained ex-Rum barrels for the finishing process but I was reliably informed that this is not the case. They utilise whisky barrels that are seasoned with Rum by Balvenie themselves. These barrels are ex-bourbon, American oak barrels that would usually be used to mature whisky. David Stewart has a ‘bespoke’ Rum blended just for him which he uses to season the barrels for a period of up to 3 years. I obviously asked about the source of this Rum blend and its components but was advised that the specifics are considered a ‘trade secret’. The time period for the seasoning is barrel dependent but the aim is to season the barrel for long enough to allow the spirit to permeate deep into the wood and for there to be a good amount of interaction between the Rum and wood. After this process, the now aged Rum is sold back to the producers and the barrels are then filled with 14-year-old Balvenie whisky for finishing.

I also asked about the abv of the whisky when it is finished. It sits at between 56 and 58% abv prior to being reduced to its bottling strength of 43% abv. I wonder how much flavour the Rum finishing imparts…..

In the glass: The Whisky is an apple juice gold with darker bronze flashes displaying in the light of this particularly sunny day. Sweet vanilla instantly jumps out of the glass along with quite a dominant honeyed porridge. Sweet nutty aromas follow which are reminiscent of nougat and warm sugary peanuts. There is absolutely no bite from the nose aside from a little peppery tingle. A raisin fudge aroma begins to develop given time and there is some light tropical fruit akin to dried papaya chunks. The Rum used must be light of body and aroma as it influence is not massively apparent. To round things out there is a little floral note accompanied by green apples and honeyed vanilla.

In the mouth: There is a nice level of viscosity to the Whisky. A peppery bite leads at the front end but that is quickly quashed by a malty, honey and fudge concoction. A little oaty and flapjack like. There is also buttery croissant following. It is in the taste that I am picking up something familiar but it is not as expected. It may just be me but there is a distinctly agricole flavour imparted onto the Whisky. It’s quite green and vegetal. This sticks with me throughout subsequent visits to the glass. The finish is of a medium to long length and is all sweet short crust pastry topped with raisins. A little peach flavour exists at the back of my throat before the tiniest bit of oak influence washes it away.

You can certainly tell that the Rum has been used as a finish not as a maturation as it is very subtle. I’d love to compare to the same whisky minus the Rum finish to see just what additional flavour I’m getting. Would I purchase a bottle? Well as a Rum drinker not a whisky drinker I’d give it a go yes. It sits at around £41 a bottle so it’s not the cheapest but it is a 14-year-old single malt and therefore it commands that price (I wonder if a day will come that we are able to talk of a Rum in this way? Technique and age commanding a price point). I don’t know if there would be enough here to keep a serious whisky drinker entertained for a while but it would offer a pleasant and easy drinking distraction with just enough going on to make it interesting.

2 responses to “The Balvenie Caribbean Cask”