La Confrérie du Rhum is a Facebook Group created in March 2013 that already has over 5000 members! Professionals and Rum lovers use it to talk about and share their common passion about Rum and sugarcane distillates. I use it to stare at pictures as my grasp of French is not the best!

For its second birthday, the administrators decided to bring out a Cuvée Anniversaire and teamed up with Cédric Brément, the famous French rhum arrangé producer of Les Ti’arrangés de Céd to produce it. On March 28th, this new bottling will be released in a limited edition of 500 bottles for sale at the Christian de Montaguère store in Paris. During this anniversary event the administrators of the group and the producer of this special bottling will release the Cuvée Anniversaire Ananas Victoria (Label Rouge) – Sauternes Finish Single Cask.

This infused Rhum uses a white AOC Rhum from Martinique as its starting point. This has been aged for 8 months in Sauternes Casks (Sauternes is a French sweet wine from the Sauternais region of the Graves section in Bordeaux) prior to being infused with red labelled Victoria Pineapples from Réunion Island. These red labelled Victoria Pineapples are rare, of a high quality and are cultivated and chosen in a very selective way. The standard of this variety of Pineapple is very high in terms of its cultivation and final product.

The 700ml bottle of this Cuvée (32% abv) is presented with a white and gold label containing the group logo. This bottling is an exclusive only available for purchase at the Christian de Montaguère store in Paris (20, Rue de L’abbé Grégoire, 75006, Paris) priced at 32 Euros from 28th March. 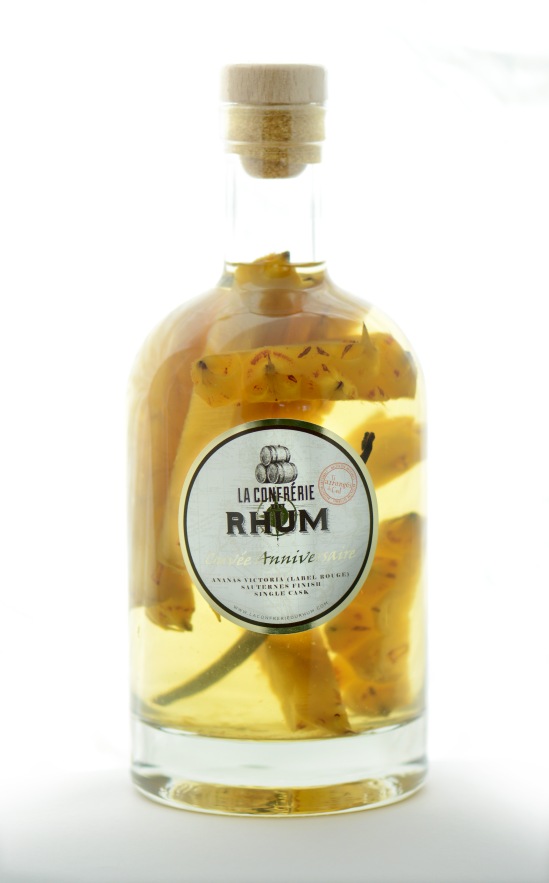 In the glass: The Rhum is a pales straw colour in the glass and its agricole base is hugely apparent. You get that vegetal punch in the face straight away but it is tempered by the lower abv and the raisin sweetness that billows over the top of the glass. This is all accompanied by a huge dose of pineapple which is sublime. I can’t help longing for summer!

In the mouth: It has an all encompassing mouthfeel full of sweet pineapple and raisins followed up by the green agricole quality. There is an earthy character too. It is warming, refreshing, sweet and now its gone! I would love to try this with a touch of ice on a hot day…its beautiful stuff.

I’m a huge fan of pineapple anything so this was always going to be a hit with me, and as my first try of a rhum arrangé the experience has been massively positive. I’m fortunate enough to have planned a short break in Paris at the end of April / early May, so obviously visiting the Christian de Montaguère store is a given as we are staying close by and I’m hopeful that I can pick up a bottle (or two) as this is very tasty stuff.