Its been a while, but I’m back with another independent bottling. Coming again from the stable of Compagnie des Indes single cask bottlings, this time the delicious Rum within is from one of my favourite producers, Saint Lucia Distillers.

For a little light background reading on Compagnie des Indes as a company you can have a look here and for info on the basics surrounding Saint Lucia Distillers you can look here…..and now that you’re back, we can continue. 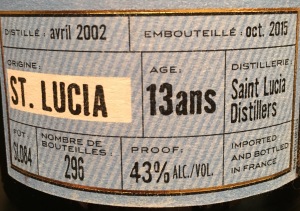 To kick things off, I’ve been told that every drop of this Rum is the product of Pot Distillation. It has seen just upwards of 5 years tropical age which gives it between 7 and 8 years in Europe, a similar level of European age as the quite excellent Compagnie des Indes Foursquare 16. There was something quite unique that the split in location did to that Rum and I hope that it also works here. There was an outturn of just 296 bottles in this cask (an ex-Heaven Hill barrel) and it weighs in at a not unsatisfactory 43%. The keen eyed among you may have also (if you read the linked articles) worked out the still that this Rum is from. As the John Dore 2 still was commissioned in 2004, the Vendome still was commissioned in 2003 and this Rum was distilled in 2002, it must by the process of elimination come from the John Dore 1 still. The interesting thing (for me anyway) seems to be the correlation between small pot stills (think the much fabled small capacity Rockley Still) and the production of really medicinal like aromas and flavours. As an obsessive of anything even remotely Rockley Still related, this really has me excited. Having been fortunate enough to taste both unaged and aged distillates from the John Dore 1 still on the recent Saint Lucia Distillers on Tour event, this assumption of a correlation between Pot Still capacity (John Dore 1 has a capacity of 1500 litres) and medicinal aromas and flavours appears, thus far, to ring true….to me anyway.

In the glass: The Rum displays itself as a straw gold in the glass and getting your nose anywhere near it instantly gives you a real hit off sharpness and a kick of the signature medicinal note. This medicinal note is present in large quantities and it brings with it a sort of salty, briny smoke. More time with the glass reveals a slightly earthy, medicinal sweetness in the form of root beer. Once you power through this (and it does take its time) you’re rewarded with a hint of something fragrant and flower like…but no real punch of oak is present which surprised me for a Rum of this age.

In the mouth: Initial entry gives no real heat but it does lead with a light fragrant sweetness….this is however very short lived and soon gets muscled out of the way by a cutting dryness that rather strangely is carried on a lot of fragrant woody notes…more sappy than heavy oaky notes. In fact this fragrant wood is a total polar opposite to what the nose gave away…it is really dominant in the early stages. The fruit is there but it is more akin to fragrance than a taste being so light as it is. The mid palate is dominated by a light fragrant flower like quality, maybe elderflower but this soon succumbs to the powerhouse of a finish. The medicinal edge that I so love powers through into the medium length finish and leaves that drying quality in your mouth with a light fennel and celery taste that fades very slowly…

This Rum yet again helps to back up the fact that St Lucia Distillers really are able to produce something special. The character that is carried through into this Rum is astounding. It may be a little one dimensional to keep my interest over an evening and the whole medicinal thing is a real turn off for some people, but fortunately not for me. At around £68 a bottle it’s not the cheapest purchase and it’s not a Rum that I can drink in huge quantities in a single sitting and it is probably best served as a reference Rum. I was hoping for something to completely blow me away in the same way that the Berry Bros. St Lucia 11 sample that I was kindly sent by Wes did, and subsequently the Berry Bros. St Lucia 14 that I now own as a result still does. But this isn’t quite up to the task. Almost amazing, but certainly a worthy purchase. However, comment must again be made about Florent and his Compagnie Des Indes company which really is starting to spread its wings and make accessible some really great Rums.