This one is a little bit of a personal post asking (pleading) for your support as I take my first steps into talking to members of the public about the Rum in their glass.

It is worthwhile pointing out that the evening will be in its most basic form, a Rum tasting, but with added information about production and categorization. The event title is Rumnaissance and I have pieced together a little look at the breakdown of how I plan to structure the night:

Rums classifications have become somewhat outdated. Location based style classification is difficult as many rums straddle a line between styles. Colour based classification along with such horrific terms such as ‘Premium’ and ‘Super Premium’ give no indicators of true intrinsic value.  A new classification system proposed by Velier’s Luca Gargano and backed by Foursquare Distillery’s Richard Seale highlights a category of identification based upon the method of distillation employed in the Rums production.

During the evening we will discuss the proposed categorisation which from the top down is split into the distillation categories of batch and continuous, and then into further categories. We will look at the basic principles behind each distillation method, how they are used in Rum production and further explore how this relates to the proposed categories. We will also look at the effects that contact with wood has on a new spirit and also how Tropical age delivers a different result to European age.

To help you along during all of this we will be tasting Rums that demonstrate these categories as we discuss them. You’ll get to try Rum-Bar Aged and unaged “Pure Single Rum” from Worthy Park in Jamaica, Doorly’s “Single Blended Rum” from Foursquare Distillery in Barbados, Admiral Rodney “Traditional Rum” from St Lucia Distillers, “Agricole Rhum” from Martinique, and Ron Cubay “Rum” from Cuba. You’ll also get to try Glorious Revolution, an Unaged 100% Pot Distilled Rum made here in the UK by Spirit Masters. A few nibbles will be provided during the break, but even then, you’ll be tasting at least 6 or 7 Rums so it is advisable to fill up before you arrive.

The link to purchase tickets is here and it would be great to have your support if you can make it.

Back with independents and back once again in familiar Foursquare territory. This time though we’re looking at a cask strength proposition….60% abv to be precise. If you’d like to refresh yourselves on the 45% abv release, please have a click here and I’ll see you in a second. In my write up of that release, I added at the end that I’d love to try this 60% release. Fortunately for me I have some friendly and generous readers. Step forward a chap called Eigon Vilhelmsen. He emailed me and offered up a sample of the Danish only release along with a few bottle shots, and I’m very grateful that he did. 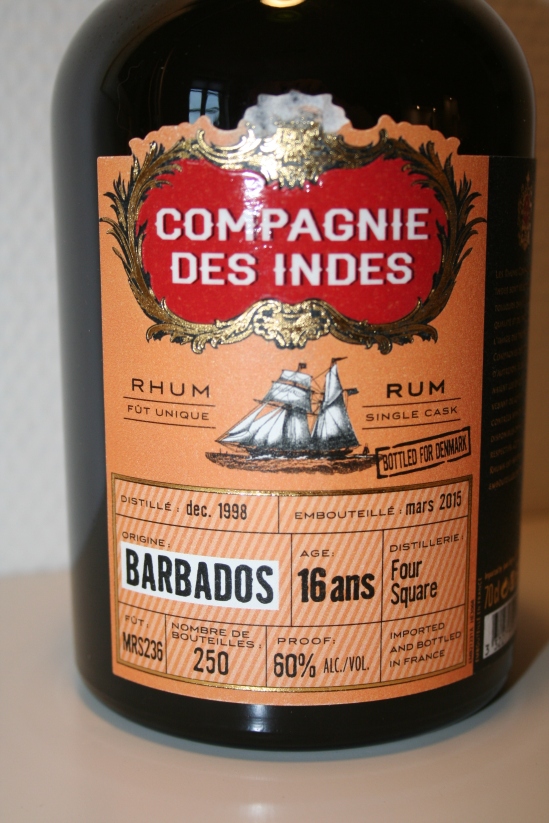 Again, as with the lower abv release this Rum was distilled in December 1998 and bottled in March 2015. We’ll have to run with the same mix of tropical and European age to make up its 16 years with 7 of those years spent in the warm climate of Barbados and the remaining 9 being in Europe…somewhere in Amsterdam. The Rum is a blend of both Pot and Column and was matured in an ex-Jack Daniels barrel. The Barrel Number as displayed on the bottle was MRS236 and this yielded an out-turn of 250 bottles at 60% abv. Again, no sweetener or colour has been added to this release. 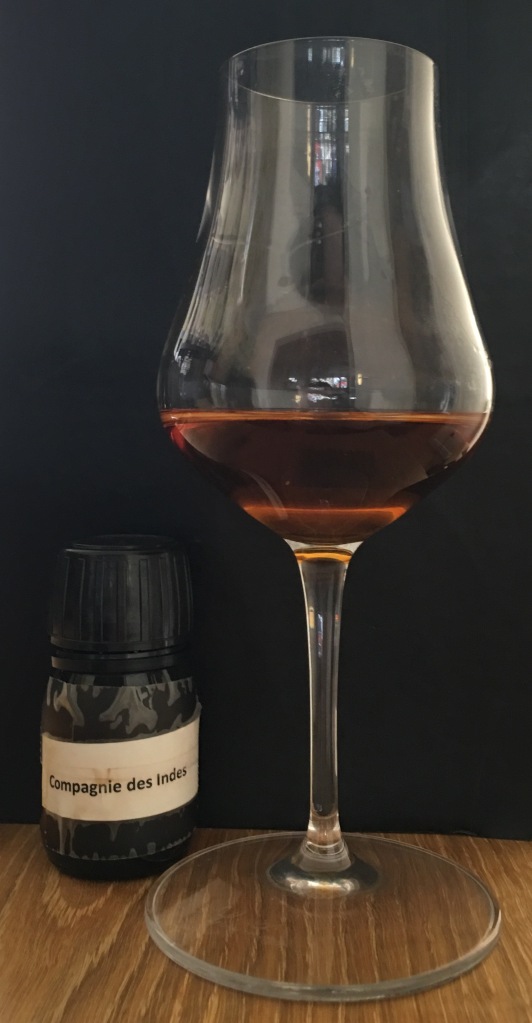 In the glass: the Rum displays itself as a dark copper and initial forays to the glass give rise to heavy astringent oak and a really intense apricot. It’s the oak that dominates the Rum for a good 5 minutes or so before it starts to back down a touch and open up. Light floral notes and bourbon like cherry follow and aromas of Bakewell Tart are aplenty…..I’m also convinced that there is a little solvent in there. Further trips to the glass remind me of the Neisson Reserve Speciale that I’ve been enjoying recently which can only be a good thing.

In the mouth: Initially the Rum is very warming but feels nothing like its 60% as its unbelievably approachable. A light sweetness on entry brings with it butterscotch and apricots like an apricot tarte tatin. It becomes dry quite quickly with very apparent oak and vanilla. The vapours creeping up my nose remind me of Peach Loops, Lidls finest children’s sweets and something that I seem to notice a lot in Foursquare Rums!  What surprises me about this 60% release is just how well-balanced it is. Nothing is too dominant and there are no off notes. It all just plays nicely. The finish is shorter than anticipated given the abv but is full of apricots, a peppery bite and it sees the return of those Neisson Agricole notes right at the death.

So, with thanks to Eigon, I have had the opportunity to try the highest abv Foursquare Rum that was available….I say was, as the Velier Foursquare 2006 trumps it slightly…..and given the well documented event that I’ll now call ‘Night of the Living Speculators’ it is another Dane that I need to rely upon to allow me to experience that particular Unicorn…..but that is for next time.

Drinks by the Dram unveil the 2016 Whisky Advent Calendar

For the fifth year running, the range of Drinks by the Dram Advent Calendars has returned. The selection once again features classics like Whisky, Ginvent and Rum, while exciting new additions include calendars dedicated to Scotch, American, Irish and Japanese whiskies along with calendars full of Glenfarclas Single Malt, independent whisky bottlings from That Boutique-y Whisky Company and Origin Single Estate Gins made with juniper sourced from specific regions all around the world.

The Whisky Advent Calendar was launched in 2012, and has since become a tradition among whisky enthusiasts, letting them count down to Christmas and explore the world’s best whiskies. Each handmade, wax-sealed dram allows whisky fans to sample a new expression, tasting everything from single grain and bourbon to rare Scotch worth up to £600 a bottle.

2016 marks the debut of the Drinks by the Dram Very Old & Rare Whisky Advent Calendar (RRP £9,999.95), developing on the concept introduced by the Old & Rare Advent Calendar launched in 2015. Each calendar is a bespoke wooden box built by hand by cabinet-maker Simon Jewell Designs in Kent, and is available in a walnut or Macassar ebony finish. Within every calendar sit 24 individually numbered 30ml drams of some of the world’s most sought-after whiskies, including expressions from long-closed distilleries, a 60-year-old single malt and a whisky worth up to £19,000 a bottle.

Drinks by the Dram’s 2016 Advent Calendar range also includes calendars filled with single cask whiskies, mezcal, gin and more. The full range of calendars (listed below) will be available later this month.

Drinks by the Dram’s 2016 Advent Calendar range will be widely available from leading retailers including Amazon, Master of Malt, Selfridges, Harvey Nichols, Fortnum & Mason, WaitroseGifts.com, Ocado, GinKiosk, Majestic Wines and Laithwaites, with more being announced when they launch at the end of the month. 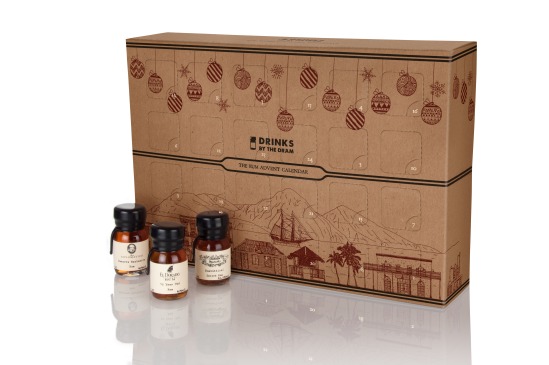 We all know that THIS is the one that you’ll be after! Last year was great so with a bit of luck we hope to get our hands on another one this year to see what delights await within!