I’d hate to think what street value my bottle of Triptych has at the time of compiling this article. I am recently back from an astonishing visit to Barbados and my first visit to a Caribbean Rum Distillery just had to be a trip to Foursquare……in fact it was so much fun, we did it twice within 10 days. Just the ability to get such a first hand, up close and personal experience was amazing….and best of all…..given the open and honest policy that Foursquare Rum Distillery has (albeit adhering to the ‘no go’ signs which are there for your own safety), you can also experience this. I wholeheartedly suggest that you do. Just to share the room with the stills that produce these Rums is worth the trip alone. But lets just take a moment to look at the glorious black bottle, the striking label and that glass of majestic dark amber liquid….. 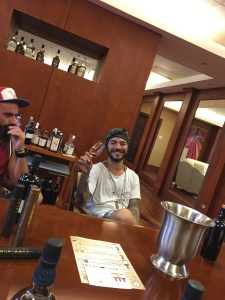 My first opportunity to try Triptych came at last years UK RumFest and even with a certain amount of palate fatigue, it was impressive……Now getting to try it again in its actual release blend format, whilst in the Foursquare Rum Distillery tasting room was the thing of dreams. I was sat next to Barnali, right opposite my good friend Nikos and I had Richard to my right. Glasses were duly prepared and Triptych was poured. The next five minutes were spent in silence, nosing the glass and grinning from ear to ear. As far as experiences go, this was by far one of the finest……but Triptych wasn’t the only thing that we got to try that day….and we tried even more when we returned for our second visit with Ivar and Mariangela….On that visit we were also fortunate enough to be joined by Gayle….but had the setting, the excitement of being in the room that I’d only previously seen pictures of, the sun of Barbados and the amazing company influenced my opinion of this Rum? Fortunately I have spent the last 5 weeks or so dipping into my available supply to compile my notes….

You’ll know all about Foursquare Rum Distillery if you’ve been here before and a few of their more recent releases can be found here and here.

A little more about this release then. The name gives up a lot….Triptych…..We automatically assume that it has three components. The bottle label details that there are three single blended vintages each with a different oak maturation. A 2004 ex-Bourbon, a 2005 ex-Madeira and a 2007 Virgin Oak. Virgin Oak for me (based on my reading, not on experience) has always been synonymous with Bourbon given its distillation method. Where a distiller can make their cuts with a Pot still or choose a specific plate on a Coffey still, a Single Column still allows the good, the bad and the ugly to pass over into the distillate. Virgin Oak I have read is used as it has an initial aggressive effect on the distillate, calming the rough edges in a short space of time. That has always led me to view its use as something that wouldn’t necessarily be used for the maturation of Rum from a Pot Still or Coffey Still…..But this is Foursquare….and they thrive on this type of innovation. I posed a couple of questions to Richard regarding the make up of the blend and the differing barrels. Firstly, this Single Blended Rum is made up of three other Single Blended Rums. I was asked via Instagram whether the blend is a collaboration between Foursquare and Velier. I can report that the blend is entirely developed by Foursquare Rum Distillery, with samples being shared with the Velier Group for their comment and observations.  The ex-Bourbon barrels were utilised for the 2004 Single Blended Rum up until bottling in November 2016. The same goes from 2005 for the ex-Madeira barrels. I did however ask a few more questions about the Virgin Oak. Firstly I wondered if the aggressive character of the barrels led to them being monitored more closely than usual during the process and whether Virgin Oak was chosen to accelerate the maturation process over a shorter period…..I received some real insight into the use of these barrels. Virgin Oak requires sufficient air seasoning to allow it to become easier to work with….and the cask choice was perhaps one of necessity. With the reported stock shortages of ex-Bourbon barrels at the time (2007), Foursquare took the opportunity to experiment and familiarise themselves with the more expensive Virgin Oak barrels (Virgin Oak is twice the cost of ex-Bourbon). Monitoring of these barrels occurs more closely due to the aggressive effects of the oak and light blends will typically spend no more than 6 months in new oak. Based on the fact that the blend spent 6 years in Virgin Oak prior to transfer into older barrels for the remainder of its maturation period (approx. 3 years), I asked the obvious follow on question of whether this Single Blended Rum was particularly Pot still heavy to cope with the effects of the Virgin Oak. This was confirmed. An excellent and open insight into the constituents of this super complex Single Blended Rum. I also managed to grab a few (hundred) photographs on our visits and below are the two stills that created this Rum. 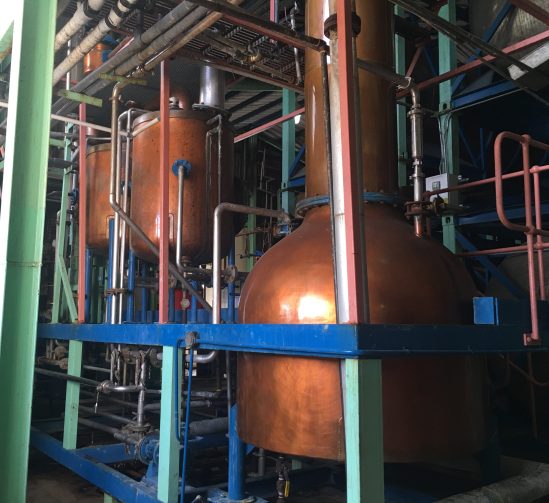 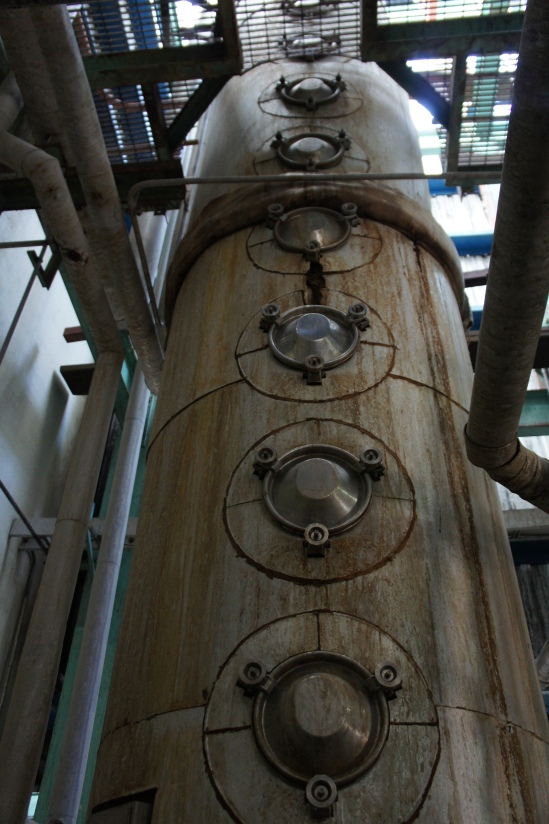 Glass: Dark amber with copper flashes. Quite a lot of astringency initially. Heavy stone fruit and the acidity of fresh quince juice. A developing grape influence and acetone. Soft but growing oak. The entire opposite of what I had expected given the presence of long maturation in fresh oak. I braced for dominant oak and vanilla….it did not dominate. Such is the complexity, even the oaken influence seems to introduce itself under a series of sub-headings. Light vanilla, pencil shavings, dusty library books, cherry influence from the ex-bourbon through to damp wood. Toasted coconut, walnuts, milk chocolate and powdery cocoa have an interplay with earthy, dirty aromas and chestnut mushrooms. Light floral notes are also present right at the back end. The nose is so well balanced. Everything just works in its own way. No shoulder barging….very British….just standing in a line waiting its turn. This can’t be a fluke though. It has to be down to exemplary cask management plus a large chunk of just knowing what you’re doing. To achieve such a soft, yet powerful nose delivering an experience that is just a joy using three such different and influential cask types is no mean feat. The nose on the 2006 was beautiful. Direct, robust and holding real depth. The Triptych almost makes it seem ordinary (by Foursquare standards). Its like comparing a three-piece band to an orchestra.

Mouth: This is a real experience. Soft enveloping amber liquid that is all encompassing. It has a beautifully velvety mouth-feel. Salty, sweet liquorice and pepper both initially and on the mid-palate. Talking of the mid-palate, the edges of your tongue almost curl as the oak announces its arrival….it takes the wheel for a good few minutes but its not overly dominant. Balance is the overarching feel to Triptych. Dry, tannic fortified wine accompanied by dates. Candied fruit peels. Apricot. Pickled Ginger. Toasted coconut. A definite sappy cedar wood. Floral wildflower honey. Its wave after wave of intense flavour. There is tropical fruit….maybe pineapple and banana. At the back end there is milk chocolate. It is a beautifully savoury / sweet Rum (thats sweet, not sweetened…never confuse the two). The finish is of a medium to long length….a dry oaken start progresses to salty-sweet liquorice and a return of the tannins and stone fruit. Again, characteristic of Bajan Rum for me is the trademark apricot vapour and its here.

Each barrel has its moment in the spotlight, tells its own part of the story. Certain elements grab onto certain areas of your tongue, pinging your senses and leading you on a journey. You absolutely could not create this experience using ‘short-cuts’….and thats what it is….its an experience. It takes the near perfect 2006 and just adds layer upon layer of complexity. Its more nuanced. More light, more shade. Sweet but never as sweet as the amazing Zinfandel and Port Cask. Even now, 5 weeks in I’m discovering more. I’ve not even added water….Did I mention just how unlike a 56% spirit this feels? It carries the intensity of a higher abv Rum but its maturity and balance make it a joy to behold.

Triptych is the mark of a Master Distiller and a Distillery rooted in tradition, devoted to doing things the right way. Building upon a desire to experiment, re-invigorated by the belief that others have placed in it and reveling in the impact that it is having on the industry and consumers alike. It is entirely on top of its game. Its ‘pulling wheelies’….not to impress….but just because it can. It is also sticking a middle finger up to the ‘Bajan rum is boring’ crowd.

I’ve struggled with this over the course of the 5 week period….dwindling my stocks of both Triptych and 2006 in side by side comparisons…..But I can hand on heart say, step aside 2006….there is a new benchmark in town……for now…..The amazing thing is, this wasn’t even the best Rum that I tasted on our visits to Foursquare….