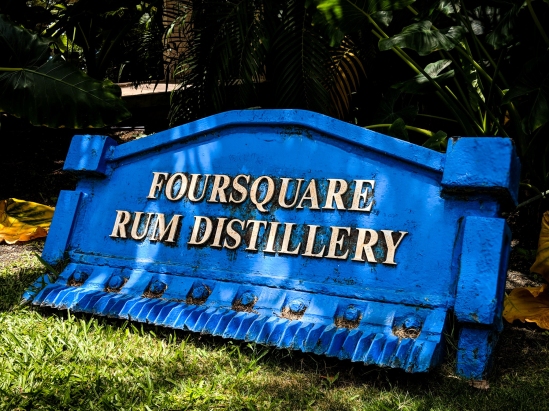 Its been a hell of a few months financially…..and not in a positive way. Everything seemingly dropped at once….the new Exceptional Cask Selections, Doorly’s 14, the surprise of Hereditas, Worthy Park 12 and the new Habitation Velier releases. Sometimes thats just how it happens…..but we can’t forget the release of Patrimonio….even though it felt like it was on the boat for a hell of a long time. One of three partially ex-Sherry matured Foursquare releases that appeared in quick succession. I hadn’t considered myself a person needed that many ex-Sherry Rums in my collection but I duly picked them all up. Hereditas (linked in the opening sentence) was the second bottle that I opened after Empery. I really enjoyed Hereditas as you will see from my review, but at the time of writing this I am probably enjoying Empery more given the bottle fill levels. They are both different beasts, which is where this trio of releases becomes interesting. From the same origins, and the same upbringing, in the same climate, we see such differing results……maybe I did need ‘that many’ ex-Sherry Rums after all. Foursquare have made good use of ex-Oloroso barrels in some of their previous and ongoing releases. Doorly’s XO sees a secondary maturation of at least a year in them, Premise sees its three years in ex-bourbon complimented by an additional 7 years in ex-Oloroso and now we have the three new additions. Often seen as a relatively ‘new’ thing to do,  Foursquare Rum Distillery are at the forefront of the successful use of fortified wine barrels. These things are viewed by some as breaking away from the ‘norm’ of ex-bourbon barrel maturation, but in actual fact its the other way around. Deliveries of Port, Madeira and Sherry would’ve been made to Barbados, and to avoid shipping empty barrels, unaged Rum would’ve been sent back in them. It makes sense to use what is available. I was fortunate enough to attend the ‘Rum Tasting of the Century’ last year and I was able to try the 1780 dated Harewood House Rum. Now that Rum was definitely young, and it definitely displayed the effects of fortified wine barrel maturation. I allude to this in my write up of the event. Ex-bourbon makes sense now given the ease of transportation plus the rules of engagement for Bourbon stating that the barrels can be used once. Anyhow, enough waffling. Lets get down to the serious business of trying Patrimonio. 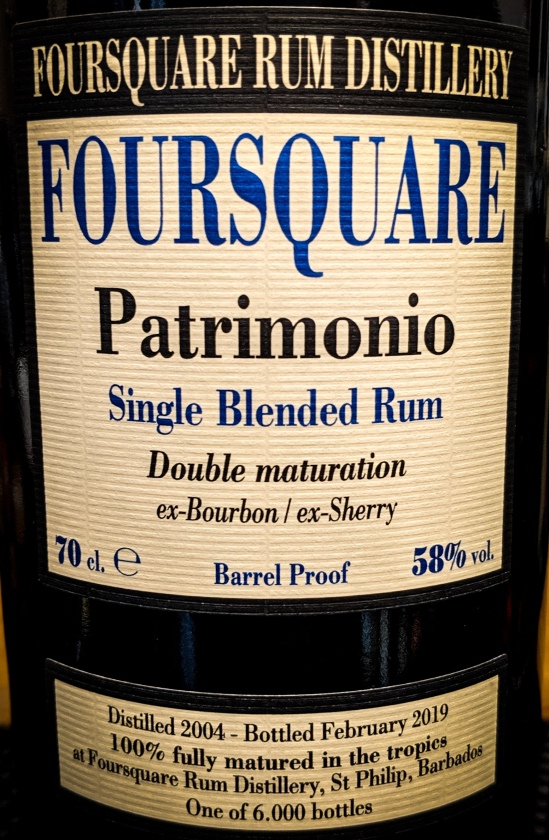 Patrimonio, as you will see above, means ‘Heritage’. Perhaps referring to the heritage of Barbados Rum in both the use of Batch and Continuous distillations to create the Rum and also the use of Sherry Barrels.

Distilled in 2004 and bottled in 2019, Foursquare Patrimonio Single Blended rum is composed of two elements. A Single Blended Rum matured exclusively in ex-bourbon barrels for a period of 14 years and a Single Blended Rum matured for 10 years in ex-Bourbon barrels before transferring to first fill ex-Oloroso Sherry barrels for a further period of 4 years. These components are then blended and rested prior to being bottled at 58% abv. No colour. No chill filtration. No nonsense. 6000 bottles were produced so hopefully more people get to experience the Rum. I first got the smallest taster of Patrimonio right at the end of the 2018 UK Rumfest on the Sunday. I was walking out of the room and happened to pass Richard who duly poured me a small drop. I had been tasting Rums all day at that point and all that I recall muttering was “Wow thats soft. Sherry? What abv? Late 40’s?”. Was my extremely ‘fatigued’ palate anywhere close?

Nose: A little astringent in the nose when first poured. I’ve found that Patrimonio needs more time to acclimatise and reveal itself that Empery or Hereditas….even though there is only 2% abv between them. It also presents itself as an oilier proposition. Plenty of wood up front and a hint of smoke. Deep dark and brooding damp oak. It’s not overly dominant though, merely announcing itself at the start of the journey. Familiarity muscles in with the classic Foursquare notes of vanilla and a hint of butterscotch. Time brings a touch of fruit and nut milk chocolate. Warm Crema Catalana with a crispy caramelised brown sugar topping. The nose on this rum is continually developing over time, it’s more an experience than an easy and immediate pour. There is also a hell of a lot developing from the barrels on the nose here with plenty of coconut and black pepper spice. Stewed stone fruit. Mixed raisins and peel. Glazed fruit cake with toasted almonds. It remains an attention holding rum with developing tobacco notes, more wet wood and an almost candied boiled fruit sweet note as it sits in the glass.

Mouth: Very big and very oily mouthfeel. A little heat from its 58% but nowhere near the level one would expect from a 58% spirit. In actual fact is pretty soft in its approach. It’s also a chewy rum and one that drinks far more instantly than the nose suggested….but the time spent nosing definitely affords the rum space to stretch its legs and develop. A beautiful sweetness washes over your palate bringing with it baked apples with a mincemeat filling. Solid and moist Christmas fruit cake. Candied citrus peel. There is a developing Demerara sugar note too. The mid palate is dominated by a growing and increasingly more forceful wet oak that excerpts an almost arid dryness on your palate. Less spice notes from the barrel, though they are there. The deep sherried notes appear and cast a little pleasing bitterness that is fully aligned with the robust oak. Tart fruits….cranberries and fresh raspberries, maybe a hint of gooseberry. Ripe Victoria Plums. The continual drive from the wood brings forth the vanilla, coconut and cocoa notes found on the nose. Pan de Higo from the crazy Mercat de la Boqueria in Barcelona. Continual glass visits bring a little growing bitterness from the fruit and barrel influence but that is expertly balanced by the ubiquitous sweetness of vanilla, coconut and cocoa. The finish is long and entirely consistent with the palate which is quite wonderful. The addition of a more prominent assertion of the tobacco notes during the final exchanges is joined by powdered liquorice root and a whiff of burnt splints.

Balance seems to be critical with Sherry Cask Rums and is very well displayed with the trio of recent releases. They are an example of how from very similar origins of ex-bourbon and ex-Oloroso, three connected but differing experiences can be created. The sherry casks, whilst all are first fill, have differing backgrounds. But how do these differing experiences come about? Temperatures can vary in the beautiful partially open sided Ageing warehouses at Foursquare. Maybe this causes more exchanges through the barrel in certain locations, maybe differing pot/ column ratios were used, this release definitely feels a little oilier and heavier. I don’t know. What I do know is that through 2006, Triptych, Principia, both Destino releases, I have been suitably impressed by the quality and experience found within these bottles. Triptych with its faultless blend of three differing oaks, Principia with its 6 years in ex-Oloroso, Destino with its 2 years in ex-Madeira all offered so much. Then we have the one that set the benchmark for all subsequent bottlings so high…..Foursquare 2006 with its 3 years in ex-Bourbon and 7 years in ex-Cognac. Patrimonio for me, is the one that can rival the experience of the legend that is 2006. A faultless display of rum making utilising traditional techniques and perfectly employing the heritage associated with historical maturation of Rum in Barbados. All of this is being done in a fully compliant manner with the proposed Barbados Rum GI which some are calling stifling and a barrier to innovation…..Amazing eh…..

© Steven James and Rum Diaries Blog 2019. Unauthorized use and/or duplication of this material, both written and photographic without the express and written permission from this blog/sites author and owner is strictly prohibited. Excerpts and links may be used, provided that full and clear credit is given to Steven James and Rum Diaries Blog with appropriate and specific direction to the original content.