I first saw this release when a friend sent me an image of the bottle. I was very intrigued as I know that Rum Sixty Six is a brand that for a good few years, a lot of us have trusted solely based upon the fact that it is / was a Foursquare product in the bottle. I mean, just look online for reviews of their Cask Strength 12 which is astonishingly good, their Family Reserve which has been upped to 43% (my own review of the 40% release from back in 2015 is available here) and the newer and younger of the aged releases which is their Extra Old 6. The Rum Sixty Six brand is owned by The Bajan Trading Company and in the tradition of all Rum brands, there was a back story…..

So, the Sixty Six of Rum Sixty Six refers to the 30th November 1966 which was a date that saw the Barbados Independence Act 1966 come into effect. The Act also presented the ability for a new constitution to take effect upon independence and this was actioned through the Barbados Independence Order 1966. This effectively made Barbados the fourth English speaking country in the West Indies to achieve full independence from the UK. A coat of arms adorns the bottle with the motto ‘Pride and Industry’. This coat of arms was adopted on the 14th February 1966 by decree of Queen Elizabeth II. The Family Reserve aspect refers to the fact that due to production costs and the effects of evaporation on long aging of Rum in Barbados, the quantities of Rum aged for this time period are reduced and their allocation reserved for family. With an allocation given the the British branch of the family which emigrated in the 1960’s. Up until the launch of Rum Sixty Six, it was only ever exported when members of the family returned home with unmarked bottles after visits to Barbados. So now that is out of the way…..

In 2016, Halewood Wines & Spirits purchased a significant stake in The Bajan Trading Company and initially really upped the profile of the brand, adding the aforementioned 12 Year Old Cask Strength and the 6 Year Extra Old as well as increasing the abv of the Family Reserve to 43%.  Sadly of late though, the Rum Sixty Six brand has seen itself appear at Rum Festivals on the same table as the Dead Man’s Fingers range……and I’ll be brutally honest, it looks completely out of place for a brand with such provenance. When I looked further and closer at the rest of the range, I picked up that although the Family Reserve and Cask Strength are still labelled as Barbados Rum from Foursquare, the 6 Year Extra Old offering is now labelled as a 6 Year Old Panama Rum……which brings us nicely onto the bottle that is up for assessment today……Rum Sixty Six ‘Fine English White Rum’. I picked mine up from The Drop Store for £13 down from £16 for a short while and the service received was great….the bottle is priced at around £20 on most other sites.

There doesn’t seem to be a huge amount of information around about this release……it’s almost as if they want it to slip under the radar. I have sent several emails to Halewood with hopes of gaining information regarding the sourcing of the Rum and further details but as yet I have not received a response. What I am 100% sure of is that this is NOT a Foursquare Rum Distillery product. So all that we have to go on is the bottle information. A 2 Year Old ‘Caribbean’ Rum is imported to the UK where it is rectified at the Sovereign Distillery in Liverpool. This is then rested and ‘matured‘ in copper tanks. Apparently the result is an ‘outstandingly smooth white rum’.  What’s also amazing is that the rectification of a Caribbean Rum in the UK also makes it an English Rum…..Lets have a look. 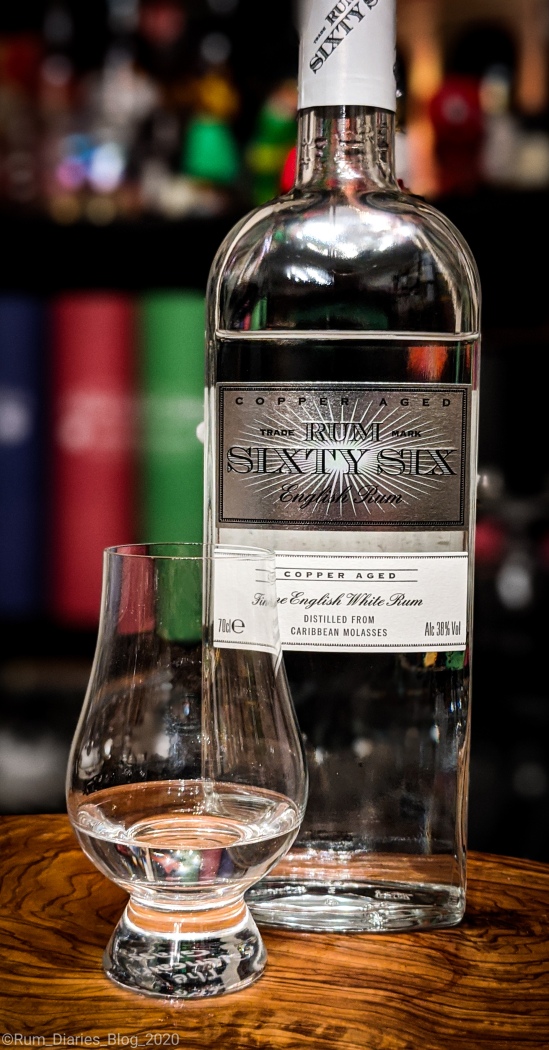 Nose: Initially the nose on this is very neutral. In all fairness, even an hour in and its still very neutral. It has the spike of a very young spirit, a hint of sweet alcohol and it then just fades into white spirit.

Mouth: Neutral again. I’m trying hard to uncover something. Young, mildly sweet alcohol. A touch of white pepper before the burn of a harsh young spirit leaves you with a warm tongue and nothing else.

In conclusion: If I had to guess and without any of the requested information, I’d say that the base 2 Year Old Rum was multi column Rum. I also don’t really see the need for it to be matured as its hard to imagine that it has any impact on the bottled product, predominantly because I just can’t imagine it being any more lacklustre than it is in its current form. The rectification has reduced what was probably in all honesty, a dull base rum, to a joyless neutral spirit. Resting a spirit in holding tanks to allow the multiple batches to marry, I’ve read about…..’Maturation’ in copper tanks however is straight up nonsense. A Caribbean Rum rectified in the UK does not become an English Rum…..but I’m glad to see that they’re not trying to pass it off as a product of its origin country…..and that country of origin should also be mighty thankful.

You may now be wondering what I actually expected from a bottle that can cost up to £20…..so I opened a couple of unaged and lightly aged & filtered Rums that cost the same or less than this bottling and carried out a side by side tasting. These were Alleyne Arthur’s White Rum from Barbados which cost me £6 (creamy, citrus oil, ginger, surprising body), Rum Bar Silver from Jamaica which cost me £22 (straight up Ester driven funk) and for the multi-column comparison I opened Don Q Cristal which cost me £20 (ginger, lightly floral, citrus). They all offer a far better experience than this bottling for similar money…..and let’s face it, you can buy Appleton Signature for £15 at times.

The really saddening thing to see is that this brand, which has built a solid reputation upon being associated with a trusted Rum producer, is being exploited and treated with such utter disdain in this way by a brand owner that clearly doesn’t care. Using the purchased Rum Sixty Six name, which up until this point has been synonymous with quality, severely and irreparably damaging it by unleashing this perfect storm of neutral spirit and meaningless marketing hogwash on an unsuspecting public is absolutely unforgivable.

This whole experience shows the complete disrespect that still exists from some quarters towards the category and the consumer.