Don Q is a brand that has been written about on these pages previously. I will admit that although they have released some very fine Rums, I usually have a tendency to steer clear of lighter multi-column spirits….its purely a personal preference thing….though if I am compelled to go for a lighter Rum, Don Q is usually the bottle that I find in my hand. The range has some real stand outs including the very flavourful Gran Anejo and the Single Barrel 2005 and 2007 releases. The Gran Anejo and Single Barrel 2007 actually have a portion of single column distillate in them, as Destilería Serrallés has a Single Column Still made by the Vendome Copper and Brass Company. You can read a little more about the other releases along with Destilería Serrallés by clicking here and here. Spiced Rums get talked about even less than light multi-column Rums here, but in this instance we will be discussing both…..

The first thing that may strike you is the ‘Oak Barrel’, hinting that the Rum is aged. Now that is not totally unusual as brands like Foursquare have been doing that for years with their Spiced Rum, but quite a large percentage of other brands utilise unaged Rums as the base for their Spiced products. The aged rum in question here is a 3-year-old blend of their multi-column Rum. This is then Spiced using Cinnamon, Vanilla, Nutmeg and Clove……natural spices….no flavoured syrups. Caramel will have been added for colour to give uniformity to the shelf appearance. The second thing that will strike you is that is presented at 45% abv…….most other Spiced Rums go in at 37.5% – 40% (probably as they don’t sell for a hugely inflated price, why pay the duty on a higher abv spirit) so this is a welcome change….though it does make me wish that they’d implement this in their Gran Anejo and Single Barrel releases which would really excel at a higher abv.

Nose: Initial sweetness. Cream soda. Vanilla. There is a warming spice character too (obviously) that is all Nutmeg and crystallised ginger. Light clove oil. Chocolate coated ginger biscuits and a fresh zesty orange rind. This is all carried on some pleasant oak notes being pushed along by the increased abv.

Mouth: A nice heated entry with the abv immediately noticeable. Not as sweet an entry as other spiced offerings though it feels like there is sweetener added. Vanilla, cloves and cinnamon in abundance. Quite a pleasant milky chai latte. None of the spices are ‘over done’…..and the best thing? Neither is the vanilla. There is a hint of kola nut being brought through on the dry woody accents which themselves run through the mid palate. Following the subtly sweet entry the rum finishes with drying oak, a nip from some fiery crystallised ginger and black pepper. Right at the back-end the vanilla has one last hurrah and the warmth of the spices sees it home.

It pairs well with coke in the right quantities (about 50/50 with plenty of ice) but this has been enjoyed mainly in a glass on its own or in the occasional daiquiri. As Spiced Rums go, its solid stuff.

We don’t consume much spiced rum here anymore, but when we do, this is one of our 3 go to offerings.

Better than 95% of spiced rums on the market and it very much models itself after the Foursquare Spiced with its aged rum base yet this offers a higher abv which is a nice touch. Now to just get them to up the abv of the Gran Anejo and Single Barrels and we’ll all be happy.

© Steven James and Rum Diaries Blog 2018. Unauthorized use and/or duplication of this material, both written and photographic without the express and written permission from this blog/sites author and owner is strictly prohibited. Excerpts and links may be used, provided that full and clear credit is given to Steven James and Rum Diaries Blog with appropriate and specific direction to the original content.

I’ve written about the core Don Q range including the Single Barrel 2005 but minus the recent Spiced addition (which I still need to grab) previously and you can refresh yourselves  by clicking here if you wish.

Now the Don Q stand at the 2017 UK RumFest gave us a little insight into two great things…Firstly the Rum that I’ll be looking at today…Don Q Single Barrel 2007….and the quite frankly mind-blowing Don Q Double Aged Vermouth Cask Finish which is a 5 to 8-year-old Rum finished for 4 to 6 weeks in 600 litre Mancino Vecchio Vermouth casks and its pretty crazy stuff with the fact that it is a multi-column distillate playing in its favour. This will be released in the UK hopefully before summer.

This is very similar in principle to the Single Barrel 2005. The explanation behind use of the ‘single barrel’ term is that all of the Rum in this limited release was from the same 2007 distillation which would then be split between the pre-requisite number of ‘similar’ barrels to carry the volume. Each barrel would then bottled individually so rather than each bottle containing the vatted blend of all barrels from the 2007 distillation, technically each barrel has its own series of bottles. There is again no way to know which barrel the bottle that you have is from. Mine is bottle 47, 823….so not too limited. Bottled in 2016 makes this a 9-year-old Rum. The same distillation process is employed as the majority of the range but this time there is a component from the Vendome Single Copper Column (taken off the still at 75%) and given the discussions recently regarding congener levels, potentially quite high in congeners. It is again bottled at 40%. 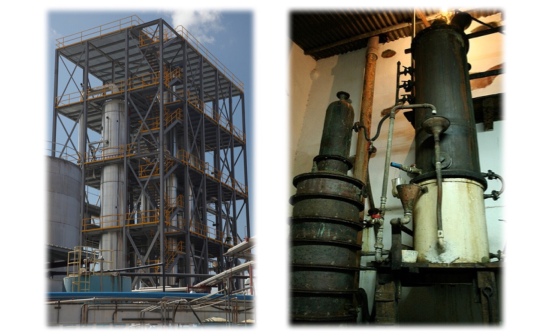 Multi-column set up and Vendome Single Column at Destilería Serrallés 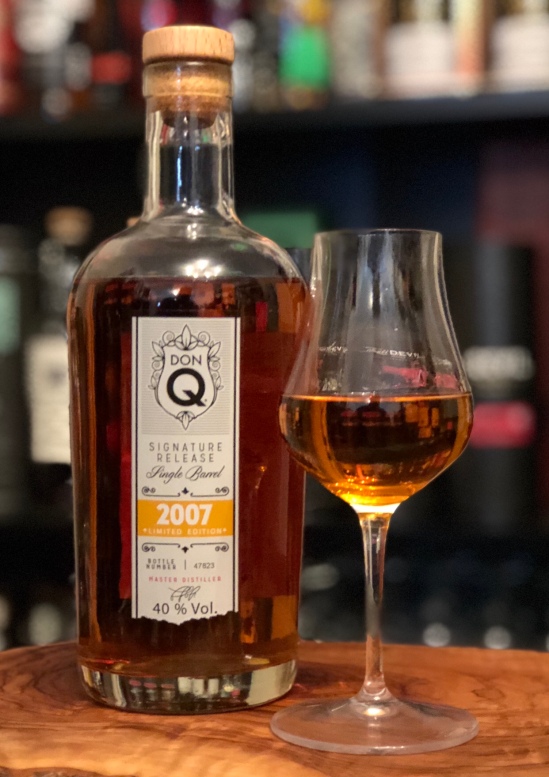 For reference I carried out the tasting process with a glass of 2005….it quickly became apparent that this was a different animal and the 2005 as not my reference…

Glass: Immediately different to the nose on the 2005. The 2007 feels a lot heavier. It’s actually, as far as column rum goes, quite the bruiser. A lot of heavy astringent oak up front. The light whiff of freshly burnt wood. A hint of tropical fruit is carried on the vanilla notes, though the vanilla notes are subdued by a little sulphury note. There is even a slight unleaded petrol aroma to the nose. This all gives way to powdery cocoa and coconut chips along with a very obvious hazelnut. I’m not aware of the ratio of single column to multi column in the Rum but its clear that the single column has a real influence….and its a good move.

Mouth: Lip-smacking entry. Peppery and dry. The oak has real teeth and it shows them straight away. This gives way to a light, floral sweetness followed up by burnt brown sugar. The mid-palate is all drying oak and spice. Nutmeg, cloves and an ‘earthy’ turmeric root. It has the pepper and spice of a rye whiskey. There is also a slight soapy note. The medium length finish brings a spicy, throat tingling heavy oak, dark stone fruit and freshly cut vanilla pods. Right at the end there are poached pears studded with cloves.

This is clearly a step up in experimentation from the 2005 and is all the better for it…though the 2005 was no slouch. This even surpasses the Gran Anejo for me which was my previous benchmark…..its a real treat. Maybe a touch higher abv would be welcome….a bump up to 43 or 46% for a special release would be ideal. That said, this is £35 a bottle and very well priced for the enjoyment within.

© Steven James and Rum Diaries Blog 2018. Unauthorized use and/or duplication of this material, both written and photographic without the express and written permission from this blog/sites author and owner is strictly prohibited. Excerpts and links may be used, provided that full and clear credit is given to Steven James and Rum Diaries Blog with appropriate and specific direction to the original content