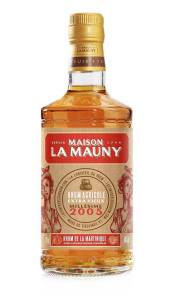 La Confrérie du Rhum began as a Facebook group created in March 2013 that developed into a platform to enable spirit professionals, bartenders, producers and everyday enthusiasts like you and me to come together and talk about their shared interest: Rhum. Since the beginning of 2015, a number of special vintages have been chosen for release by the guys heading up the group La Confrérie Du Rhum and this time it is the turn of Maison La Mauny to provide the liquid. They do so in the form of a 2005 vintage Extra Vieux Rhum Agricole that has seen a full 11 years in French Oak that proudly carries the Martinique A.O.C (appellation d’origine controlee) marque. It is released at 49.7% abv and the release is limited to just 1000 bottles priced at €90.

Glass: A deep, dark coppery red greets you when you pour the Rhum into the glass. It has the unmistakable aroma of a well aged spirit. Given that it’s almost 50% abv, there is nothing particularly aggressive jumping out of the glass. On the contrary, this Rhum has a well-rounded fruity nose. There is a hint of marzipan combining with ripe dark berry fruits and this combination is reminiscent of a jammy Bakewell tart. The nose develops into stewed dark fruits and begins to allow nutty and leathery notes to come to the fore. Further time sees the development of a light cocoa and an ever developing oak influence. Time in the glass uncovers layers of complexity in this Rhum which lets not forget, has seen 11 years of age in the tropical climate of Martinique. This is an island that I have read has a climate that leads to one of the greatest losses to evaporation. There was potentially the chance that this length of time could have been too excessive, but to my surprise the years have been very kind.

Mouth: An intensely dry entry sucks that moisture from every corner of your mouth. There is a lightly acidic quality and a very prominent bittersweet tang that reminds me of the bottle of Umeshu Plum Sake that I have chilling in the fridge. A second wave of stone fruits and a chewy homemade blackberry jam follows. The oak influence starts to creep back into the experience with a charred, almost toasted note coming to the fore. The long finish begins with a growing menthol eucalyptus note and further develops into drying oak shavings and a peppery, celery quality.

There are layers upon layers of complexity within this Rhum and it deserves time and patience far in excess of what this small taster allows. Benoît and Jerry really know how to pick their special releases as for me, they have delivered on all of the previous releases that I’ve purchased. This one will be no exception…..when it comes back into stock that is….

© Steven James and Rum Diaries Blog 2017. Unauthorized use and/or duplication of this material, both written and photographic without the express and written permission from this blog/sites author and owner is strictly prohibited. Excerpts and links may be used, provided that full and clear credit is given to Steven James and Rum Diaries Blog with appropriate and specific direction to the original content.

This is the second release linked to the La Confrérie du Rhum Facebook Group and makes a switch to the French West Indies in the form of Guadeloupe. Hailing from the Bellevue au Moule Estate and Distillery which was established at the end of the 19th Century by a Mr Rimbaud from Martinique. The distillery is now owned and run by Mr Hervé Damoiseau after it was acquired by Mr Roger Damoiseau in April 1942.

This particular expression was distilled in March 1998 in a column still. Cask #86 was aged in Guadeloupe until September 2013 when it was transferred to Germany. The Rum was extracted from the barrel in November 2014 and bottled in January of this year (2015). This makes the Rum a rather accurate 16 years and 9 months old! This is NOT an Agricole…..it is a molasses based Rum.

A little more subdued, this releases label has a more muted colour palette, being shades of cream but the same fonts have been used along with the same red text. There is also a greater availability of this release as 156 bottles have been produced. The bottle shape and familiar red wax seal from the first release remain.

Again, the Rum was inhaled so quickly that this only represents my initial thoughts based on one the one glass that I have enjoyed. As before, if I am successful in obtaining a bottle, I reserve the right to revisit my notes…

In the glass: The Rum is a crisp coppery gold in the glass. A little swirl leaves a wall of Rum, then long droplets lazily meander back down. The first aroma is perhaps one of my childhood, but it is of Fruit Salad chewy sweets. It’s beautiful. There is a little astringency, a tiny medicinal edge and a lot of fruit there. This smells like it will be quite syrupy. Next there is some freshly cut apple and a heavy dose of rhubarb! Spicy oak and vanilla round this one out. It is a pleasure to sit and smell.

In the mouth: Initially there is a whiff of smoke along with the medicinal note. This is not at all like the aromas. It is not syrupy and is most certainly not as fruity as the nose says. The oak is dominant and there is a slight vanilla sweetness that gets dried out very quickly by the moisture sapping oak. A touch of liquorice and some pepper hit my tongue next. This is so so drinkable. The finish is of a decent length and has a cheek tingling oak spice. Hints of smoke and that drying oak influence and medicinal note carry this over the finish line. Where did the fruit go? Would less age allow more of the fruit to push through the oak? There is a bitter note right at the end like treacle coated raisins. There is also a faint prune note right at the back of the finish.

Sadly this sample is now gone……but I’m hopeful of a bottle of this Rum when it goes on general sale. 156 bottles means that there is a better chance for more people to try this, and try it you should. It is a certain purchase for me.

Big thanks again go to Benoît Bail for allowing me the opportunity to try this Rum.

© Steven James and Rum Diaries Blog 2014. Unauthorized use and/or duplication of this material, both written and photographic without the express and written permission from this blog/sites author and owner is strictly prohibited. Excerpts and links may be used, provided that full and clear credit is given to Steven James and Rum Diaries Blog with appropriate and specific direction to the original content