Rum Exchange is Facebook Group that was created by Andreas Isopp to, you guessed it, provide a platform for bottle and samples trading…..but much more than that, it is also a company that was set up to facilitate the introduction and selling of Rums that not considered ‘mass market’. They take complete control of the import, trade and distribution of these brands and products. They provide a link between producers, retailers and consumers. 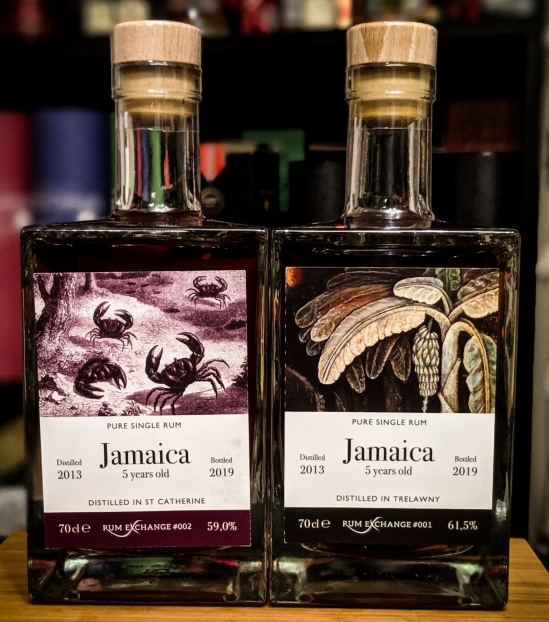 This Rum, a release of 355 bottles (mine is number 85) is a Pure Single Rum from Hampden Distillery in Jamaica. Distilled in 2013 it saw 3 years of distillery maturation in ex-bourbon prior to being shipped to Denmark and spending a further 2 years in an ex-oloroso barrel. It was bottled in May 2019 at a bruising 61.5% abv. Presentation wise I like the squat square bottle. Sits well on the shelf and pours well. The artwork is definitely of note with the image depicted being Banana Plantation by John Dunkley who was a Jamaican sculptor and artist (the labels were the work of Jordan Harper who is an all round nice chap who I first met on the British Bourbon Society Facebook page). The label is also keen to state that the rum is free from sugar and colouring which hints that those oloroso barrels were VERY influential! 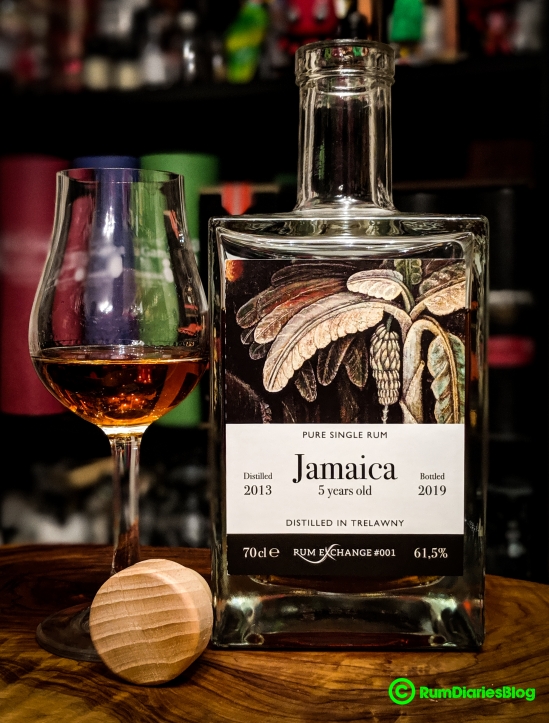 Nose: Heavily sherried. It’s all raisins and fruitcake in the early exchanges with added Quality Street toffee pennies and a dollop of Cartmel toffee sauce. The brightness and depth of the Jamaican Rum does fight through after a while though. Its funky….but not balls our high ester funky. A little astringency follows, not unexpected given its relative youth. Candied Pineapple. Caramelised Pineapple sugars. Banana bread. Quite sweet with a hint of bitter burnt sugar. As the Rum warms in the glass there is a little spicy oak influence bringing barrel notes of pepper, an earthy turmeric and maybe a hint of fenugreek seeds. It also becomes slightly nutty. It draws you in as this is complexity that some may think was unexpected….but lets not mix up maturity with age. It continues to gain momentum and its complexity starts to win you over.

Mouth: Youth and abv definitely show themselves initially. Its hot and a little prickly. This gives way to an initial savoury assault of roasted root vegetables. Smoked cheese. A little wood influence brings spicy ginger root before the sherried notes kick in. Pineapple juice fights through. The mid-palate has stone fruit. Quite a bit of bitterness. Molasses. Treacle toffee. Pickled balsamic onions. The spice begins to grow. The finish is mildly sweet with pineapple upside down cake but the savoury muscles in. Smoked cheese. Pickled onion Monster Munch. Reds Kansas BBQ sauce with a little sweet smoke.

I tried this a few weeks ago in an online tasting with Johnny Michaelsen of Spirits People. We tried a little water in the glass. Maybe enough to take it down to around 55% abv. We both found that this dulled the experience and it lacked a little robustness maybe due to a relatively short time in the barrel or the mixed maturation locations but it all kind of unraveled and became too dull an experience so we both added more Rum to the glass to bring the abv up again.

All in all an interesting take on a Hampden and it is definitely different enough, in a good way, to make this a worthwhile purchase. All too easy is it to allow the fortified wine barrels to suffocate the distillate and although the sherry is robust, it doesn’t ruin the experience. Not a classic representation of Hampden, but its tasty stuff.

© Steven James and Rum Diaries Blog 2019. Unauthorized use and/or duplication of this material, both written and photographic without the express and written permission from this blog/sites author and owner is strictly prohibited. Excerpts and links may be used, provided that full and clear credit is given to Steven James and Rum Diaries Blog with appropriate and specific direction to the original content.